1 example at the pizza pavillion 2015 venice 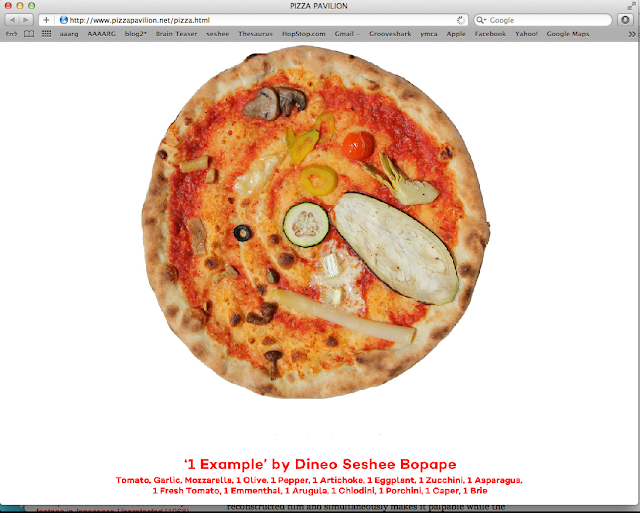 http://www.pizzapavilion.net/pizza.html
Posted by dineo seshee bopape at 11:14 AM No comments:

we need the memories of all our members 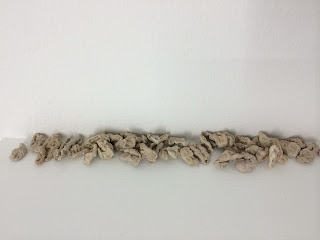 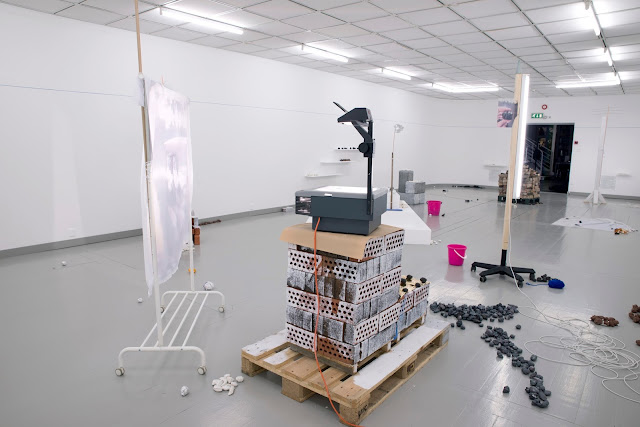 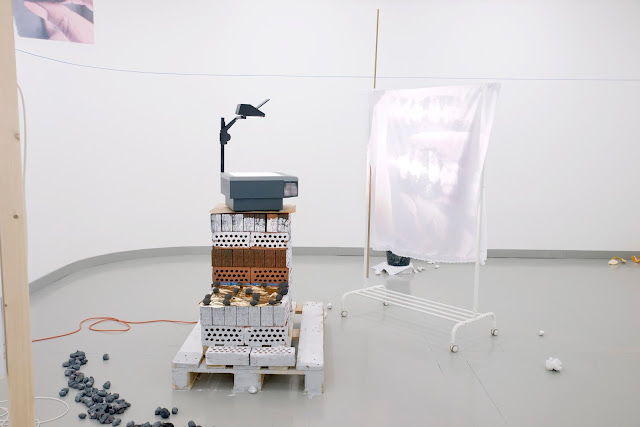 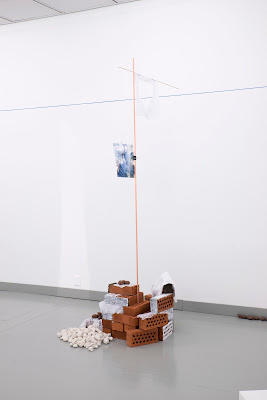 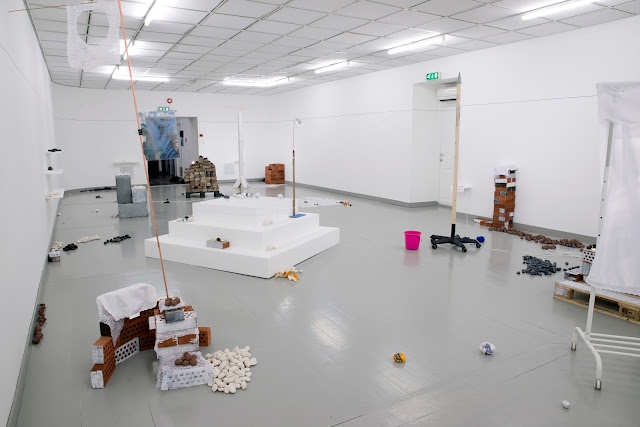 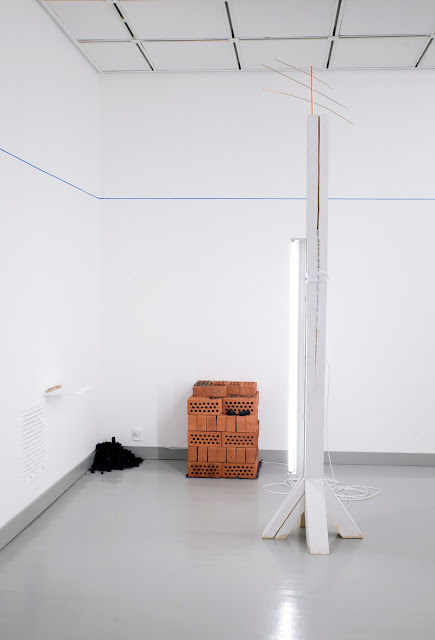 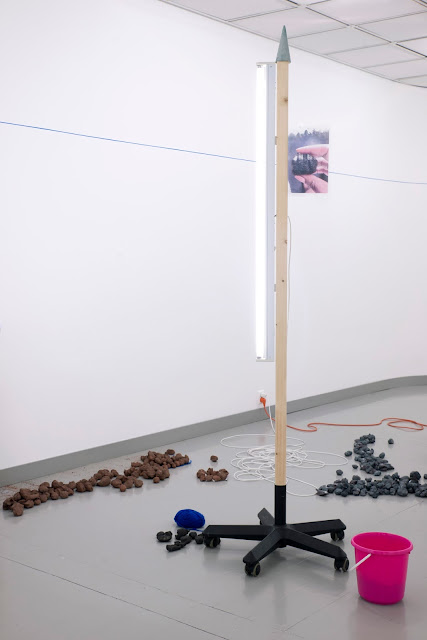 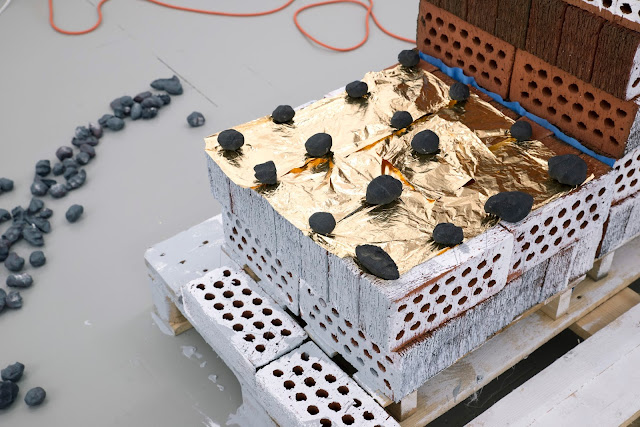 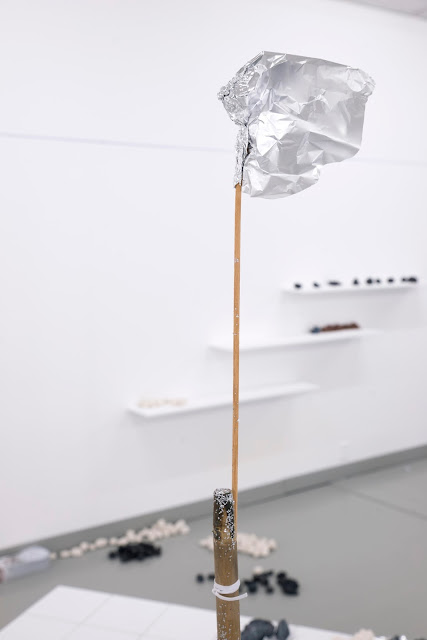 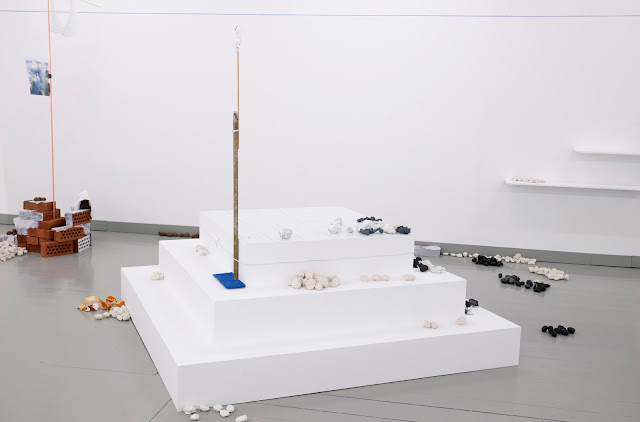 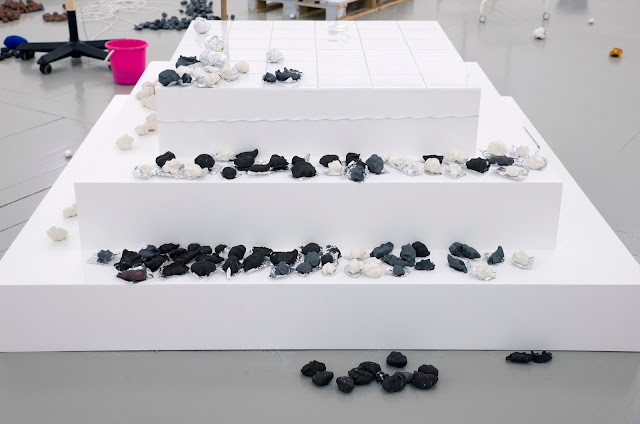 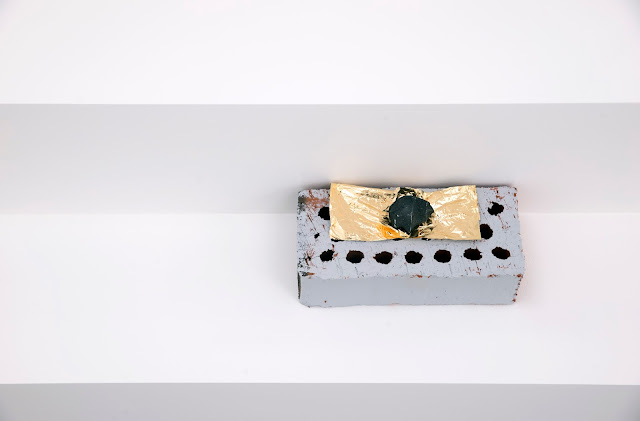 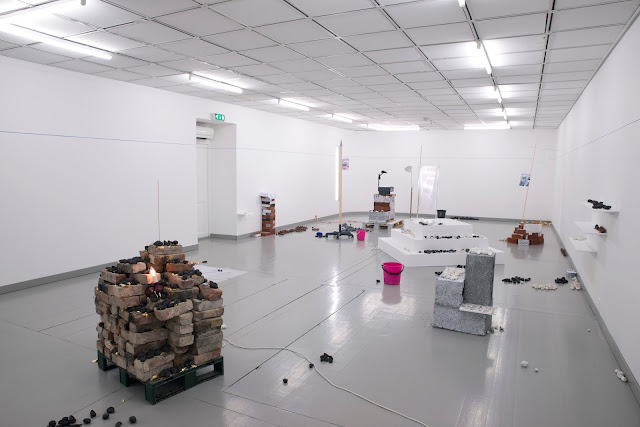 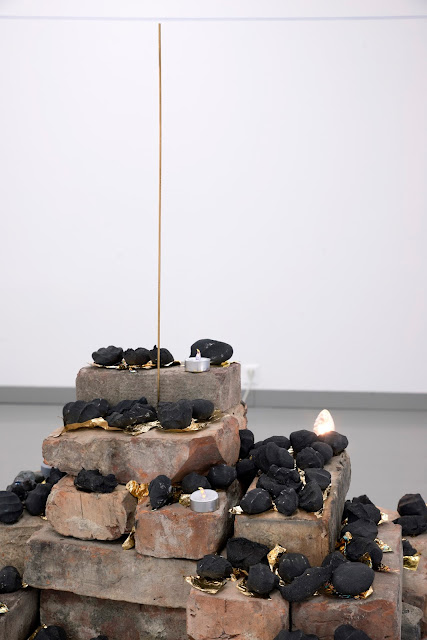 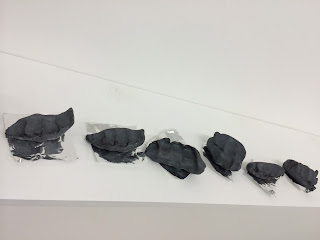 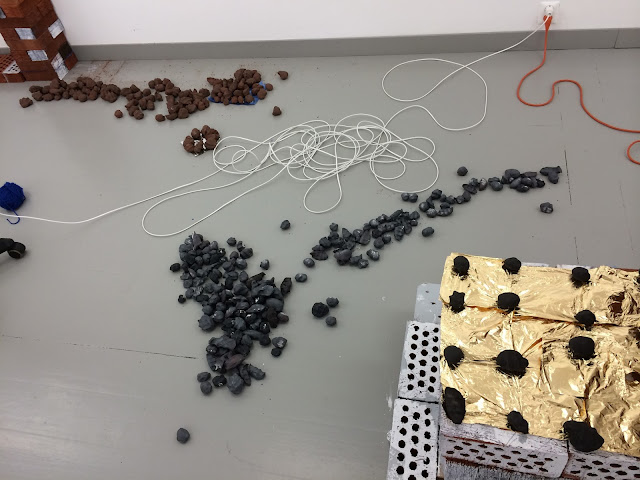 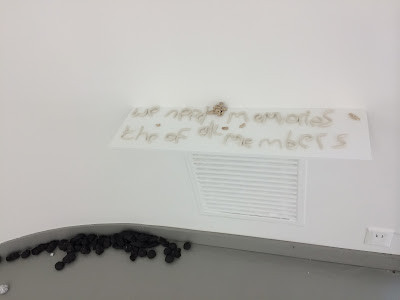 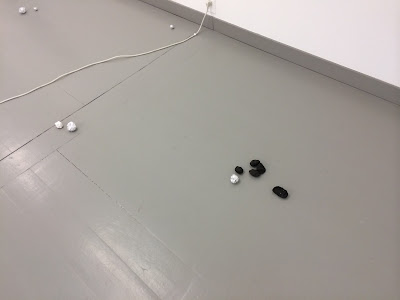 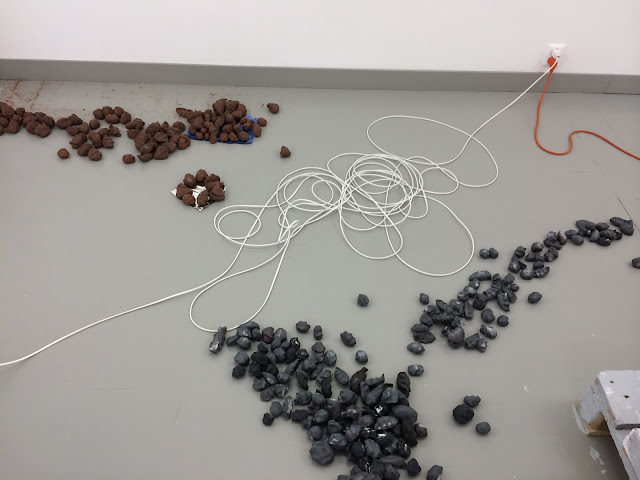 "we need the memories of all our members" solo show at HKS, Bergen 2015

We need the memories of all our members
…amongst the many things that the invited speaker on the radio show said was that “we need the memories of all our members” –… the words before and after are lost- as is his name, and the name of the radio show and the host and the time of day…
… that somehow seemed appropriate for the process that would help to bring the work in the show together-
The process of grabbing clay in one’s hand, forming it inside one’s fist- releasing it…letting it dry and firing it to make it rock hard- amassing the potential to DO … host. Hoist.
As in the Biblical story of David and Goliath… it is said that David brought down his giant opponent by slinging a rock at him (…thereafter slaying his head with the giant’s own tool)
I continue to work with ideas of memory and holes… Somehow the process of remembering is – a big part of the process of making the objects/making the rocks
(That the clay remembers- has traces of  its mold…)
The _______5 is somewhat an articulation of the/a/an (unstable) ‘void’ wrapped by the fingers when making a fist
Nature arbhors a vacuum?
the sign itself contains a trace of what it does not mean- Spivak in of grammatology

is this an intent to remove the ______?Is it removing it or just displacing it- it goes elsewhere- it is temporarily/for the time being located elsewhere
Shifting/floating signifier
In the same way that the clay takes shape in the cup of the hand embracing the crevices in the process- the chewing gum one can say does the same- taking an imprint of the teeth, a ghost of its chewer
-
in the meantime- whilst this, that or the other was happening ( __ ___was chewing gum)
witnesses3

self presence
present to one’s self?
A trace of the self- as it were-
as the trace of the body or the process of their making …
of a self/_________

Tshere tshere- which is similar to hopscotch
Or Morabaraba- a game with holes and stones
Masekitlana-  self made ‘theater’ with rocks as characters- and sand heaped and  formed into all sorts of props/furniture, borders/markers/situations…
The burden of meaning
A Hair ball… that also marks time.., Chewing gum

Clay- of the earth.. dust to dust
Material

There is a story about Sobukwe (who was born where it is now called Zimbabwe)
that upon the arrival of the new prisoners at robben island, he had grabbed a fist full of soil in his hand, and raised his fist and saluted the new robben island (political ) prisoners (freedom fighters)
monument to the anthropocene….
There is a certain idea/perception that the fight for political power or the fight for the right to be- perhaps began in the last century- 6
There are questions that linger in one’s mind like how could a group of few conquer a group of so many and keep them subjugated for years and years- it must be known that the fight began from the first encounter

A politic of holes/presence/margins/shadows/invisibles etc.
(the rules of boxing)(how to curl your hand)(and hold death closely)
violence
a violence to end all things to begin again at nothing- with no memory…8

groups nonqauwuse, jim jones, disciples…
what have they all seen… those who were the witnesses

there is also a story of a nanny who took pictures/a photographer who disguised herself as a nanny/a photographer who worked as a nanny
there is a story about Vivian Maier, whose photographic works were discovered by the world upon her death… I had read an article somewhere speaking about her self portraits… she took a lot of pictures of  people and things – but also took photographs of herself… some of them were via mirrors- a lot of them were via mirrors…and some of her photographs were of her shadow… and some include her shadow amidst/in the midst of other things1… there is something quiet enigmatic about her work- and her process- that she didn’t herself see most of her own photographs/self portraits… she just took them(future promise)- yet she continued to take the pictures- experimenting with various  compositions… without ever seeing them- or verifying them…
like writing with invisible ink- that the writer uses blindly- without seeing its trace
ok- back to self presence- or witnessing of one’s self
how does one see one’s self? Make one’s presence known to one’s self….
How does one witness?

1.     in the midst of other things: her shadow- that mysterious immaterial thing signifying some kind of presence- in the mist with other things that are perhaps in and of themselves enigmatic…mysterious
2.     not about taking the private making it open

3. during a meeting – the participants left their chewed gum beneath chairs and desks and other similar common ‘hiding places for gum’…
hiding places for chewed gum: underneath school desks, underneath chairs,tables and also bus seats, behind mirrors, underneath shoes, stuck on hair, filling key holes on doors,
5. made of soil, sand, dust : nothing
6. nostalgic photo images
8 refuse the notalgic
4. Rules of morabaraba…I have never learnt the rules of morabaraba- (like most games like cards, dice,dominos) I had always failed miserably at it but the look of it is interesting: holes and stones…the stones are active-  it would be interesting to invert it making the holes the active agents…

Posted by dineo seshee bopape at 3:13 PM No comments: